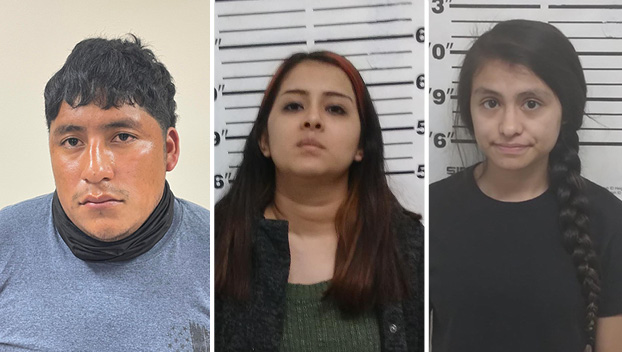 Three people have been arrested and charged with aiding four inmates to escape from a Mississippi jail last week.

Officials from the Alcorn County Sheriff’s Office announced the arrests on social media.

“As part of the ongoing investigation into the August 5th escape of four inmates from the Alcorn County Jail; Ana Ruiz 29, of CR 510 in Corinth, Yira Sauceda 25 of Hwy 356 in Rienzi, and Elias Jimenez 21, of Madison St. in Corinth, have been arrested and charged with Felony aiding of jail escape.,” the post said.

Law enforcement in Alcorn County, Mississippi, said the inmates escaped the prison by cutting a hole in the facility’s roof. Security camera footage shows them running east from the prison toward the National Guard Armory in Corinth around 2 a.m.

Alcorn officials did not provide any detail as to how Ruiz, Sauceda and Jimenez helped the inmates escape.

Ruiz and Sauceda were arrested on Friday, Aug. 5, in Alcorn County by Alcorn County Sheriff’s Office investigators. They have been charged and released on $10,000.00 bond.

Jimenez was arrested on Friday, August 5, by Louisiana State Police in Baton Rouge. Jimenez is awaiting extradition along with three of the escaped inmates back to Alcorn County.

The investigation is ongoing and more arrests and charges are pending.

Investigators arrested Ruiz and Sauceda on Friday, Aug. 5 in Alcorn County, according to an Alcorn County Sheriff’s Office news release.

Reyes, Sims and Wiginton were captured Friday evening near the campus of Louisiana State University (LSU) in Baton Rouge.

Braudway was arrested early Saturday northwest of Corinth near the Tennessee border at a home on County Road 793.

Caldwell would not provide details on how the three suspects allegedly helped the escapees.

Ruiz and Sauceda are related to Reyes, the sheriff said; Jimenez was formerly housed in the jail with Reyes but was out on bond at the time of the escape.