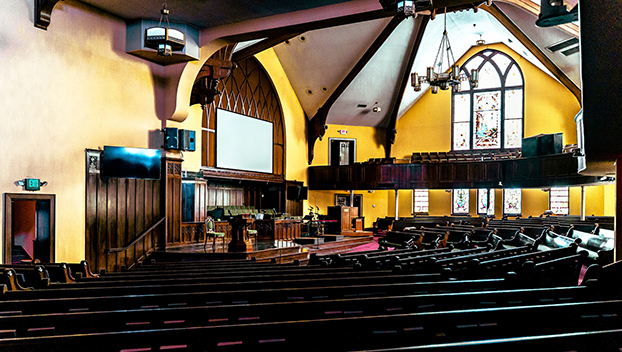 The Golden Triangle Theatre has found a new home in a familiar place, the former First Baptist Church building in downtown Columbus.

The massive structure, built in 1908, had been on the market since 2005 before Vince Rapisarda purchased it earlier this year. He was soon approached by the organization about potentially using part of the space.

“(The Golden Triangle Theatre) approached me a while back about what they do and the fact that there is no theater in Columbus, and they knew I had the sanctuary as well as all kinds of office space and classroom space,” Rapisarda said. “I was pretty excited when they first approached me.”

The Golden Triangle Theatre, while a relatively new group, is a nonprofit formed with the goal of supporting and growing the arts in Columbus. However, it was transient in the early days, which made it difficult to really sink its teeth in at first.

“The theatre is really completing its first year of existence, we formed back in June of last year, and we were working, primarily, in a few locations,” said Garrett Torbert, executive and artistic director of the organization. “We started out at Annunciation Catholic Church, in their activity center, and then we ended up, this past spring, at the Columbus Arts Council, and we kind of created a little partnership with them.”

The theatre offers lots of programs for adults and kids in the community with the goal of promoting the arts and encouraging creativity, but the problems really came when it began to rapidly grow.

“We had such a large enrollment in the spring versus the fall where we had about 15, and in the spring we had about 57, so it was a huge increase,” Torbert said. “This summer, we worked on deciding our next goal and how we wanted to continue to establish ourselves, and we thought the best way was to find a facility that would accommodate our needs because we do want to grow and offer more things.”

The organization has another inspiration for the expansion though, one that hits much closer to home.

“This summer, we lost one of our instructors who really helped me get the program started,” Torbert said. “It really had a great impact on how we moved forward, and I think one of the things that she would have wanted us to have done was to continue on. So that’s what we’re doing.”

The instructor was Tennille Komulainen, a teacher at Columbus Christian Academy who had a background in the performing arts, but did not have much of an outlet to explore those passions in the area, which led to her involvement in the theatre organization, Torbert said.

“She had degrees in theater, and I think her coming on board really reignited a fire that she once had,” Torbert said.

The theatre plans to hit the ground running later this month, and the once empty corridors of the church will be filled with the sounds of children, and adults, discovering their passions.

“We will start occupying the space this fall and we will use it for our weekly classes that we do, and then also, we are starting to offer more opportunities for instruction, such as music lessons,” said Torbert.

The theatre and Rapisarda share a common goal, making the building a central location for the arts in the area.

“With the Golden Triangle just moving in there, I think that’s a start, and we want to grow upon what they’re doing,” Rapisarda said. “We’d like to grow that beyond just the Golden Triangle Theatre Group. I’d love to get more of that type of groups in that building.”

The sanctuary is a sight to behold. While the stained glass windows and the balconies fit the theatre theme perfectly, the stage does not.

Thus, the stage will be changing to fit the theatre-appropriate aesthetic of the rest of the sanctuary, as well as making it possible to stage performances there. It will simply involve building a flat stage where the existing one is.

With Rapisarda heading up that aspect of the project though, the theatre has begun preparations for its upcoming season.

This season, it will once again offer a full slate of entertainment.

It will host a holiday showcase on Dec. 9, which will include a local girls’ choir and a strings group. Then in February, it will stage a production of “Annie” followed by “Sound of Music” in May.

The theatre also plans to expand its base.

“We are looking to reach a broader base, expanding more into West Point and Starkville, as far as our student base, and we’re getting that, so we’re really excited about that.”

It currently hosts 11 instructors/volunteers, however it is always looking for more people who are passionate about the arts.

“We are always looking to add, our goal is to be as inclusive as possible,” said Lindsay Clemons, president of the group’s board of directors. “Anyone who has an interest in performing arts and theatre arts, anyone who is interested in helping in any way, we welcome contributions of time, talent and of course financial contributions are always welcome.”