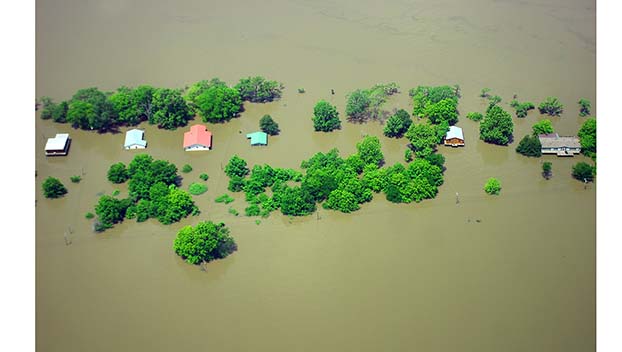 A retired engineer suggested a rather outlandish-in-scope but logical-in-approach solution to the seemingly growing floods in the central U.S. and the water woes of the West Coast – build a nearly 1,500-mile aqueduct to connect the two.

Flooding along the Mississippi River basin appears to have become more frequent in recent years, as has the drying up of water sources in the West.

So retired engineer Don Siefkes of San Leandro, California, wrote a letter to The Desert Sun newspaper in June proposing the best solution was to move the water from where it isn’t needed, namely the lower Mississippi River basin and pump it to the west to fill Lake Powell.

Specifically, Siefkes suggests the aqueduct be built from the Old River Control Station, a facility built by the U.S. Army Corps of Engineers to help control the flow of water where the Mississippi and Atchafalaya rivers meet, approximately 45 miles south of Natchez, Mississippi,

“… Citizens of Louisiana and Mississippi south of the Old River Control Structure don’t need all that water. All it does is cause flooding and massive tax expenditures to repair and strengthen dikes,” Siefkes wrote to the Palm Springs, California, newspaper.

“As mentioned, New Orleans has a problem with that much water anyway, so let’s divert 250,000 gallons/sec to Lake Powell, which currently has a shortage of 5.5 trillion gallons. This would take 254 days to fill.”

Siefkes said Lake Mead could also be filled in approximately a year.

“Lake Mead has a somewhat larger shortage, about 8 trillion gallons, but it could be filled in about 370 days at 250,000 gallons/sec.”

Although not vetted yet by scientists, the seemingly outlandish idea has become a viral proposal online. It seems simple, right? You just pump water from the places that have too much to a place that has too little, and voila, problem solved. Or is it?

Casting aside what would likely be decades of litigations that would be sparked by any plans to divert water, a USA Today report on the matter suggested at least one environmentalist has pretty big concerns about the aqueduct.

National Audubon Society Delta Conservation Director Erik Johnson suggested the impact of diverting the silt-laden, muddy Mississippi River water could have a detrimental effect on the Louisiana coastline, which is rapidly disappearing.

“You’d be swapping one ecological catastrophe for another,” Johnson told USA Today.

Although physically expensive, such a pipeline would be feasible, but it would take decades to accomplish — and the floods and droughts are going on right now, critics of the plan have said.