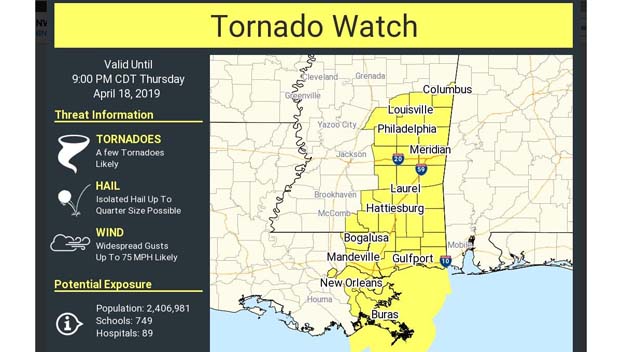 Forecasters warned about tornadoes and other violent weather Thursday as a front that unleashed twisters and hail in the lower Midwest moved into the storm-weary Southeast.

The National Weather Service issued a series of tornado warnings about a system pushing eastward across Louisiana, where strong storms covered much of the state.

Dozens of schools dismissed students early as a precaution in Louisiana, Mississippi, and Alabama, where the threat was expected to continue after nightfall. Government offices were also closed statewide in Louisiana.

Winds could be nearly as strong as during a hurricane, forecasters said.

No significant structural damage was reported, but heavy rainfall caused flash flooding that prompted the shutdown of Interstate 30 in central Arkansas and the closure of several schools around Little Rock.

The threat came days after more than 40 tornadoes from East Texas to Georgia left at least nine dead. That outbreak damaged more than 250 homes, businesses and public buildings across Mississippi.