Hurricane Laura expected to grow to ‘catastrophic’ storm before landfall 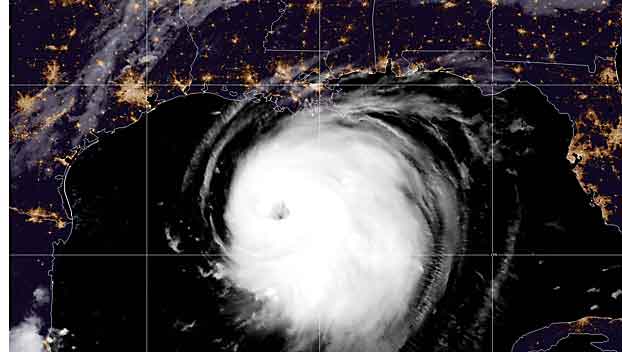 Hurricane Laura is forecast to rapidly power up into a “catastrophic” Category 4 hurricane, even stronger than previously expected, as it churns toward Texas and Louisiana gathering wind and water that swirls over much of the Gulf of Mexico.

Satellite images show that Laura has become “a formidable hurricane” in recent hours, threatening to smash homes and sink entire communities. It has undergone a remarkable intensification, “and there are no signs it will stop soon,” the National Hurricane Center said in a briefing early Wednesday.

“We are expecting widespread power outages, trees down. Homes and businesses will be damaged,” said Donald Jones, a National Weather Service meteorologist in Lake Charles, Louisiana, which is near the bullseye of Laura’s forecast track.

“I’m telling you, this is going to be a very serious situation,” Jones said.

Louisiana Gov. John Bel Edwards said Laura is shaping up to look a lot like Hurricane Rita did 15 years ago when it ravaged southwest Louisiana.

“We’re going to have significant flooding in places that don’t normally see it,” he said.

Ocean water was expected to push onto land along more than 450 miles (724 kilometers) of coast from Texas to Mississippi. Hurricane warnings were issued from San Luis Pass, Texas, to Intracoastal City, Louisiana, and storm surge warnings from the Port Arthur, Texas, flood protection system to the mouth of the Mississippi River.

The evacuations could get even bigger if the storm’s track veers to the east or west, said Craig Fugate, the former head of the Federal Emergency Management Agency.

Fearing that people would not evacuate in time, Edwards said those in southwest Louisiana need to be where they intend to ride out Laura by noon Wednesday, when the state will start feeling the storm’s effects.

Officials urged people to stay with relatives or in hotel rooms to avoid spreading the virus that causes COVID-19. Buses were stocked with protective equipment and disinfectant, and they would carry fewer passengers to keep people apart, Texas officials said.

Whitney Frazier, 29, of Beaumont spent Tuesday morning trying to get transportation to a high school where she could board a bus to leave the area.

“Especially with everything with COVID going on already on top of a mandatory evacuation, it’s very stressful,” Frazier said.

The storm also imperiled a center of the U.S. energy industry. The government said 84% of Gulf oil production and an estimated 61% of natural gas production were shut down. Nearly 300 platforms have been evacuated.

While oil prices often spike before a major storm as production slows, consumers are unlikely to see big price changes because the pandemic decimated demand for fuel.

Laura passed Cuba after killing nearly two dozen people on the island of Hispaniola, including 20 in Haiti and three in the Dominican Republic, where it knocked out power and caused intense flooding. The deaths reportedly included a 10-year-old girl whose home was hit by a tree and a mother and young son crushed by a collapsing wall.

As much as 15 inches (38 centimeters) of rain could fall in some parts of Louisiana, Jones said.

At Grand Isle, Louisiana, Nicole Fantiny said she planned to ride out the hurricane on the barrier island along with a few dozen other people.

“It could still change, but we keep on hoping and praying that it keeps on going further west like it’s doing,” said Fantiny, who manages a restaurant.

“If you decide to stay, you’re staying on your own,” Port Arthur Mayor Thurman Bartie said.

Magnolia or shield? Which of Mississippi’s two final flag…