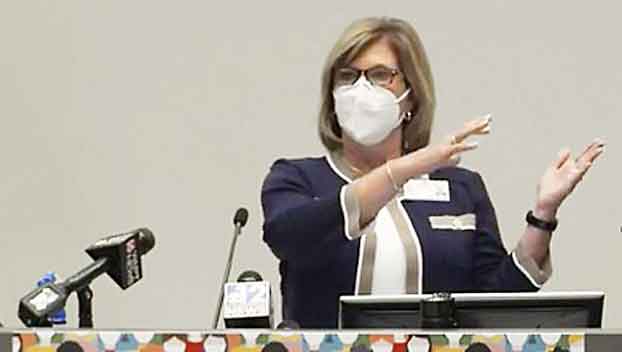 Reeves became the first governor in America to rescind a statewide mask mandate on Sept. 30, and COVID-19 cases and hospitalizations have steadily climbed since that date. Since the statewide mandate expired, however, Reeves has issued more than a dozen county-by-county mask mandates — a piecemeal approach that has received some criticism from medical experts.

“We do very much believe we should have a statewide mask mandate,” Woodward said Monday at a press conference. “… I think we have reasonable evidence to believe the county-by-county approach is not working. It’s not doing what we need it to do. It is not turning these numbers around for us.

“With the governor being the highest level of state official, I think that sends a big signal for that position to say, ‘We are at a critical point, people. We need to have a statewide mask mandate.’ That sense of urgency is rapidly becoming much more intense and powerful. And what we have been doing hasn’t turned us around.”

Woodward was also vocal in the days leading up to the governor’s first statewide mask mandate in early August. State Health Officer Dr. Thomas Dobbs, who leads the state’s health department, has recently posted to social media information about the effectiveness of mask mandates.

The rise in COVID-19 cases in Mississippi — a surge only topped by the record spread in July and August — has persisted for nearly two straight months. On Saturday, the state health department reported a single-day record of 1,972 new cases. The seven-day rolling average reached 1,294 over the weekend, which is the highest mark since July 31.

The state health department also reported close to 900 total hospitalizations for people with the virus. That mark is at its highest point since Aug. 26. Health officials on Friday warned the public about managing spread in the cold months and during the holiday season.