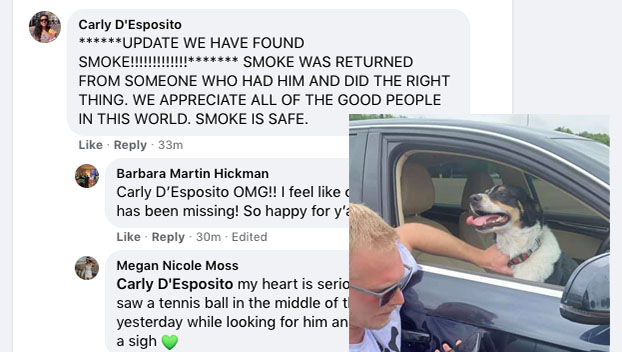 A Colorado man is no longer looking for his canine companion after a Jackson community helped the man find his dog after his truck was stolen. The truck was later found torched at an abandoned Jackson car wash without a trace of the dog.

Hunter Crisler had his truck, motorcycle, dog and $20,000 worth of cannabis products stolen from outside a Jackson bar. The man went to social media in hopes of getting the most important possession back, his dog Smoke.

Smoke was taken while inside of his Cadillac Escalade last week.

Over the weekend his truck was found at an abandoned car wash on Northside Drive in Jackson, but Smoke remains missing. Crisler is working with Mississippi Lost Dog Recovery to find the dog. Some people have reported seeing a dog that looks like Smoke roaming the streets around Ridgewood Road.

Earlier last week, Crisler, whose Facebook profile shows he’s from Clinton, Mississippi, had his Cadillac Escalade truck containing the motorcycle, cannabis products and his dog Smoke inside stolen from outside The Bulldog bar on Ridgewood Road in Jackson.

Crisler’s social media profile indicates he runs a business call Crisler Cannabis Company and in a social media comment he said the truck contained $20,000 of his product.

He’s offered a $1,000 reward for information that leads to getting Smoke returned. Crisler told a Jackson TV station that Smoke was a rescue dog and was approximately 5 years-old.

“Please please help,” he wrote on social media. “He’s the love of my life and I don’t know what I’ll do if I can’t find him. Please. Please help.”