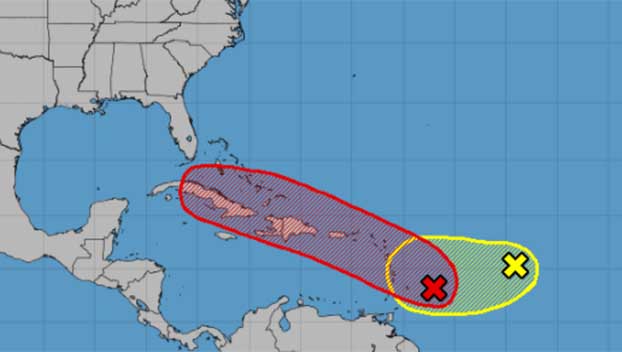 Tropical trouble is brewing in the Atlantic.

AccuWeather meteorologists say a system that was becoming better organized in the basin Monday has the potential to become the sixth tropical depression and named storm of the 2021 Atlantic hurricane season at any time. Forecasters will be tracking the system, which could be named Fred, since it could approach Florida or the Gulf of Mexico by the weekend.

As of 8 a.m. EDT Monday, the system was located over the tropical Atlantic, just to the east of Barbados, and was moving toward the west-northwest at 15 mph.

“This system has a window to develop as it moves west-northwestward through the Caribbean into Wednesday due to low wind shear,” AccuWeather Chief On-Air Meteorologist Bernie Rayno said. Wind shear is the abrupt change in strength or direction of breezes at increasing height in the atmosphere or across the sea surface.

The system is projected to pass through the Leeward Islands during Monday night, just south of the U.S. Virgin Islands and Puerto Rico Tuesday and then over or just south of the Dominican Republic and Haiti at midweek.

As the system moves westward, an uptick in showers and thunderstorms will occur along with building seas and surf along the way, even if the center does not pass directly over some of the islands. Some locations from the Leeward Islands to Puerto Rico and Hispaniola can be hit with locally torrential rain that can lead to flash flooding, mudslides and road closures. Locally strong wind gusts can lead to power outages and property damage.

Spiking COVID-19 cases will push hundreds of Mississippians to…