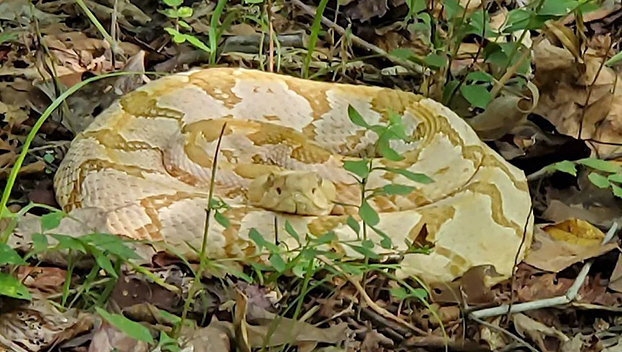 A Mississippi woman bent down to pick berries and came face-to-face with a snake she — and most of the world — had never seen before.

In fact, the snake she discovered is so rare, no statistics are kept to track the type of snake she happened upon.

The Clarion-Ledger in Jackson reports that Danielle Ladner came upon the blond timber rattlesnake while she was picking berries and muscadines with a friend and her twin girls in Yazoo County.

Not a true albino, Ladner found a timber rattlesnake with a rare genetic condition that causes it to appear white.

Herpetologist Terry Vandeventer of Terry told the Clarion-Ledger that the odds of encountering a snake with the rare condition are so low they can’t be calculated. Vandeventer said the snake has one of two possible genetic conditions; T positive albinism or hypomelanism. Both cause a limited range of colors in a snake’s skin.

The snake was caught by officials from the Mississippi Department of Wildlife and Fisheries and taken to the Mississippi Museum of Natural Science in Jackson where it will stay in captivity for museumgoers to enjoy and learn about.

Although it’s at the museum, it will be several weeks before the public can see it.

Click here, to read about the snake and Ladner’s story.