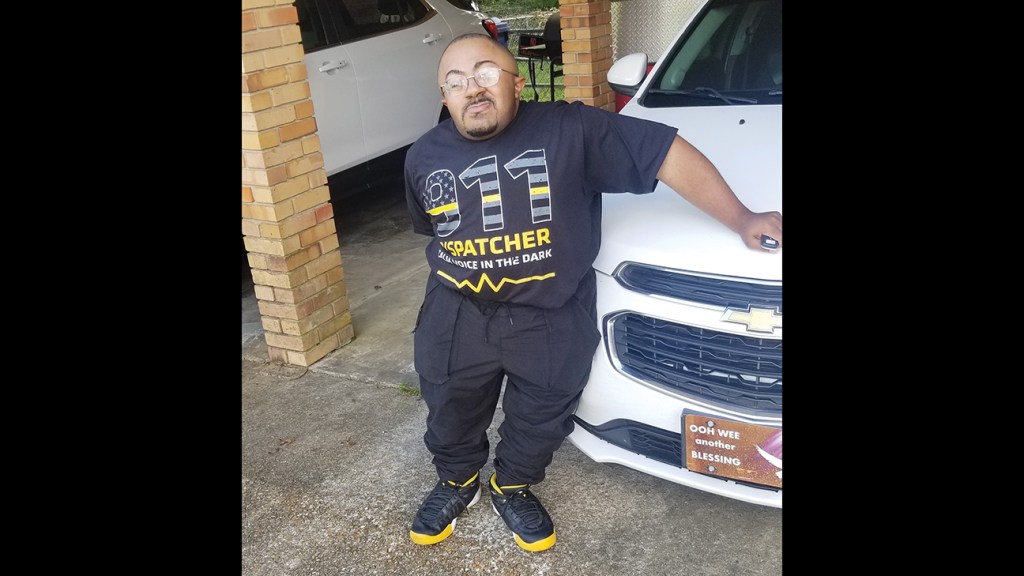 No matter the size of a man, he’ll always start off with big dreams for the life ahead of him. As he should. As we all should.

Alan “Trey” Henderson was just such a boy — he knew exactly what he wanted to do since he was 12 years old. The thought of being an emergency dispatcher kept him focused on the future, and no disability was going to stop him from finding a way to make his dream a reality.

Henderson suffers from Osteogenesis Imperfecta, commonly referred to as Brittle Bone Disease. In his more than two decades of life, Henderson has dealt with almost 80 broken bones and three surgeries. Though he tried to stop, for some reason, counting at the 74 mark, Henderson has actually endured about 30 more additional breaks than that.

But he hasn’t let any of that slow him down; he’s got work to do.

In July, Trey began employment as a 911 dispatcher for the Brookhaven Police Department. Police Chief Kenneth Collins encouraged Henderson to apply after the two met. Collins said all Henderson needed was for someone to open the door for him to pursue his dream. “He has a disability, but that doesn’t mean he can’t work and do the job,” Collins said.

“He is a very knowledgeable young man and he isn’t looking for a handout. Trey wants to learn and be the best dispatcher he can be. He was just looking for a door to open and when I opened the door, he took it upon himself to be the best. He is motivated and has a beautiful attitude.”

Everyone who has met Henderson seems to bond with him immediately. At the Lincoln County/Brookhaven Government Complex Oct. 26, scores of acquaintances and friends fist-bumped or gave a shout out to Henderson and his family as they awaited the swearing-in ceremony for new dispatchers.

Henderson, who works Friday, Saturday and Sunday as a dispatcher, says every day is different, which is one of the reasons he loves it. “It’s always something,” he said with a wide grin. “And it’s exciting.”

Shauntinae Smith, the department’s administrative assistant, is a fan of the young man, saying “he’s sharp, he’s hardworking and he learns fast.”

Henderson, who stands 4-foot, 6-inches tall, uses a rolling walker and a motorized wheelchair to help him get around. Despite his disability, he has never let that stop him from achieving his goals in life. He obtained his associate’s degree from Copiah-Lincoln Community College in December 2018, then attended the University of Southern Mississippi, where he obtained in two years his bachelor’s degree in liberal studies with a minor in communication.

While at USM, Henderson participated in the Peer Mentoring Program and was a production staff volunteer for the campus radio station until his on-campus experience was cut short due to the COVID-19 pandemic. He completed his USM studies virtually due to the pandemic.

The Mississippi Department of Rehabilitation Services, which helps individuals with disabilities gain independence through employment via its Vocational Rehabilitation Program, assisted Henderson with his college expenses to obtain his associate and bachelor’s degrees. MDRS also provided him with a covered trailer to haul his motorized wheelchair and helped him with his career pathway and search for employment.

Karen Brooks, a deputy district manager for the Mississippi Department of Rehabilitation Services, said it has been a pleasure working with Henderson because he is such a polite, friendly and outgoing young man who never meets a stranger.

His mother is not surprised to hear that. “I always told Trey you will have to learn to be nice to other people, be respectable to people, and thank God every day of your life,” she said. “I said if you put God first, you can do anything.”

Now 23, Henderson said his parents, Willie and Victoria, always told him he could do anything in life through God if he put his mind to it.  “I’m very proud of Trey,” said his mother. “His mind has been sharp since Day One. Don’t let nobody tell you what you can and cannot do. You are your own person. You set your destiny for you.”

Henderson said despite his disability, he has never felt sorry for himself. He credits his parents with his positive outlook on life. “You can move forward with your disability,” he said of his advice to others facing challenging situations.

He encourages everyone who has a disability and is seeking employment to contact a local vocational rehabilitation office to get started on making their own dreams come true.