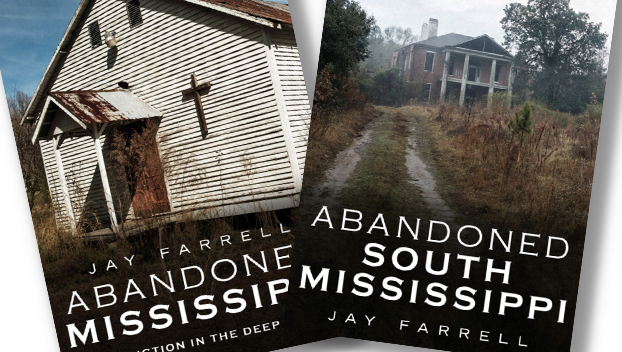 When Tennessee photographer Jay Farrell sees an abandoned building, he sees opportunities to learn about who lived or worked there and how a community has changed.

“I try to see what items are left behind and what stories they can tell,” said Farrell, who lives in Nashville.

He has traveled around Mississippi and other Southern states taking pictures of abandoned buildings. Farrell has published those images and history about the buildings and communities in a series of books.

“Mississippi is one of those states people don’t talk about it or people don’t explore it,” Farrell said. “It’s a state not many people know about unless you’re from there.”

He has visited former homes, businesses and industrial areas during his travels in the Magnolia State and around the South.
In Choctaw County, Farrell visited an abandoned house with photographs and other items left behind, which he found creepy.
“It was basically as if grandpa left and never came back,” he said.

Whenever he is at an abandoned building, Farrell said he mindful about where he steps and keeps an eye on his surroundings if the building seems unstable. His goal is to leave the space how he found it.

Sometimes he works with local historians to learn more about abandoned places and visits them, which is what he did in Aberdeen. Farrell said a local historian took him to an abandoned ordinance factory, an old prison and an antebellum house.
After trips, Farrell researches the places he has photographed.

In Oktibbeha County, he took a picture of a former business called Gentry’s Store. Through his research, Farrell found a glass business in the community using same last name. He reached out to the business and spoke with the owner whose father, it turned out, once ran the shuttered Gentry’s Store.

As Nashville has become more gentrified, abandoned places have been harder to find, Farrell said. The area where the mill once was now has newer buildings and coffee shops, Farrell said.

He has begun exploring more of the countryside in Alabama, Kentucky, Indiana and New York, where Farrell is originally from.
Photography can get lonely, Farrell said, but he has been able to meet people through his travels.

He hasn’t been able to travel as far during the COVID-19 pandemic, but Farrell said he has continued to explore abandoned buildings in Tennessee and Kentucky.

Farrell said plans to return to Mississippi and visit the Jackson area to explore and try food from the Capital Region.