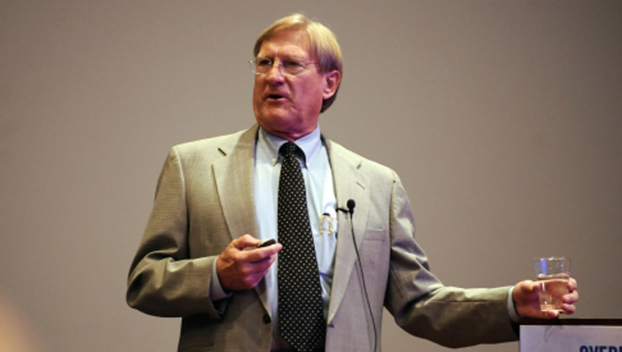 A memorial service will be held Saturday, Feb. 26, at Oxford-University United Methodist Church beginning at 11 a.m. Waller Funeral Home of Oxford is in charge of arrangements.

He was also acting vice chancellor for academic affairs on three separate occasions and interim chancellor for a month in 1995. He was provost from 1996 until he retired in 1999.

“Gerald Walton was a respected academician, administrator and longtime friend,” said UM Chancellor Emeritus Robert C. Khayat. “His dedication to Ole Miss, its people and its future was unwavering. His perseverance and wise counsel were greatly appreciated. I will always remember him for his intellect, creativity, kindness, tolerance and strong value system.”

Gloria Kellum, vice chancellor emeritus of University Relations, remembers Walton as a “very good friend and very kind and positive person to everyone that he met.”

“Dr. Walton was a strong advocate for faculty and for the development of academic programs,” said Kellum, recalling the professional camaraderie and abiding friendship the two shared.

“Dr. Walton was a very gifted writer and communicator. We worked together on various university projects,” she said. “I have always had an immense respect for how much he loved the university and its students. He was truly a champion who created many educational opportunities for them.”

Kellum said Walton also had a wonderful sense of humor.

“He always had a way to come up with the right quip at the right time. His jokes would have everyone in the room laughing.”

Morris Stocks, provost emeritus, chancellor emeritus and professor of accountancy, described Walton as “a powerful and strong leader on campus, a scholar, thinker and creator of books.”

“We celebrate Gerald Walton’s extraordinary life,” he said. “He truly made a lasting, positive impact upon all of us who worked with him and knew him well.”

Walton was warmly remembered by one of his successors in the provost’s position.

“I am saddened to learn of former Provost Walton’s passing,” said Noel Wilkin, provost and executive vice chancellor for academic affairs. “He was a fine administrator and was truly committed to the success of the university. He set a high standard for the academic mission of our institution.”

A prolific writer and unofficial university historian, Walton authored “The University of Mississippi: A Pictorial History.” With more than 400 pages of imagery and nostalgia, the book (Booksmith Group, 2008) captures the campus taking shape from its birth to today.

In Oxford, he was an active member of the Oxford-University United Methodist Church and held several leadership roles there, including historian.

Walton was a dedicated and loving husband of 66 years to his wife, Juliet Walton, an associate professor of communicative disorders, and a loving father to three daughters.

The Waltons moved to Memphis in 2014. He was a volunteer at Trezevant Manor, where he served on several committees and was president of the Residents’ Association.

In lieu of flowers, donations in his memory may be made to either Friends of the Library at the University of Mississippi (University Foundation, 406 University Avenue, Oxford, MS 38655) or the Trezevant Manor Foundation at 177 N. Highland St., Memphis, TN 38111.