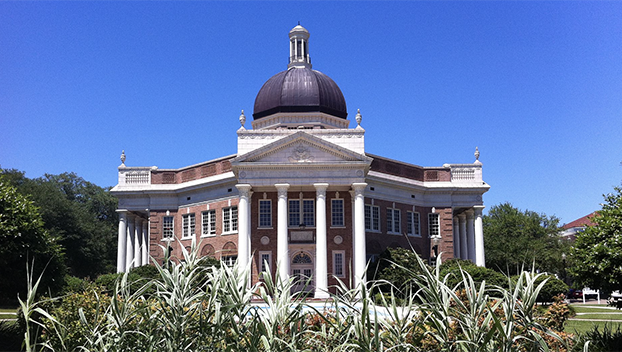 Alkendria “Desiree” McNair’s passion for technology began with video games and evolved into an interest in 3-D printing houses.

“I started off playing video games, then I went to kind of fixing phones. I’ve always just had my hand in technology, but no one in my community really pushed technology careers,” the 27-year-old said.

Now a student at Southern Miss studying information technology, the Collins native is interested in how 3-D printing of houses can lead to more sustainability and lower home costs. She was inspired by the lack of affordability of houses and a passion for the environment.

“3-D printing is another way that they can create homes and buildings without taking the natural resources. … I thought that was something amazing that you could literally build a house with a machine,” McNair said.

McNair is a mother, and she said her 3-year-old daughter Amora Hathorn inspires her to be successful.

“She inspires me a lot to keep pushing when I’m tired,” McNair said. “I kind of do this for her. She has autism, so I want to be able to provide her with the services she needs as well.”

McNair balances her responsibilities as a mother and student along with her job as a student worker in the Southern Miss computer science department. She is also a member of the university’s Women in Science and Engineering Organization, a historian for the Louis Stokes Mississippi Alliance for Minority Participation and a veteran.

She was recently selected as a 2022 IBMzSystems Student Ambassador for her accomplishments.

McNair will participate in a leadership program to upskill her technical knowledge, network with industry leaders and collaborate with peers worldwide this summer.

Sarah Lee, director of the Southern Miss School of Computing Sciences and Computer Engineering, said McNair is a leader.

“As an IBM zSystems Student Ambassador, she will have a great opportunity to expand her network as she builds relationships with professionals from throughout the country and further develop her leadership skills,” Lee said.

McNair hopes she can be an inspiration for others to pursue their passions.

And the adversity that she has faced inspired her to be successful.

“It just pushes me more in a way,” McNair said. “Instead of looking at challenges like a problem I try to solve them. I like to solve problems I guess.”

Before she began her journey, McNair didn’t feel she knew enough about technology but decided to put the work in to learn.

“Since I’ve been in this field, it makes me feel like I’m not working because I feel like I’m actually doing something that I actually love to do,” McNair said.