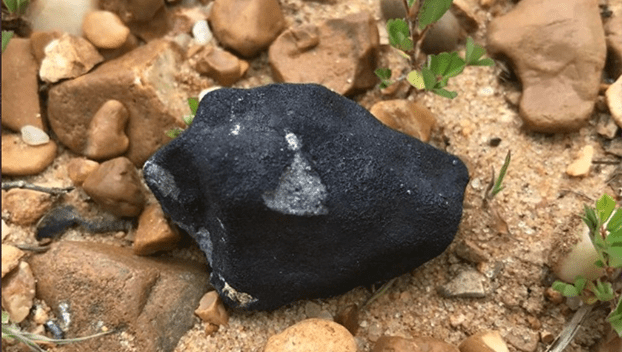 Fragments of a meteor found on a southwest Mississippi highway earlier this month could be 4.5 billion years old.

Scientists from Houston traveled more than five hours to southwest Mississippi along U.S. 84  east of Natchez in Adams and Franklin Counties to find and retrieve samples of the meteor that created a fireball in the skies along the Mississippi River.

Around 9:03 a.m. on April 27, more than 30 people from southwest Mississippi and the surrounding region reported seeing the fireball and hearing a loud “boom.”

The boom reportedly came from the meteor traveling at 55,000 mph, generating an energy equivalent of 3 tons of TNT as it broke apart. The resulting shock waves made a loud sonic “boom, according to officials from NASA.

The reports attracted the attention of many people who collect and study meteors, including scientists from Houston.

KHOU 11 in Houston interviewed the scientists about their discovery of the fragments that are now being analyzed at NASA’s Johnson Space Center in Houston.

Marc Fries, a NASA cosmic dust curator, and Linda Welzenbach Fries who works in the Earth and Planetary Science Department at Rice University, found the fragments.

According to Space.com, the husband-wife duo made the first two official finds of meteor fragments of at least three confirmed in the region.

Pictures of the meteorite on Space.com suggest that the fragments are from an ordinary chondrite meteorite — the most numerous group of meteorites discovered, comprising about 87% of all meteor finds.