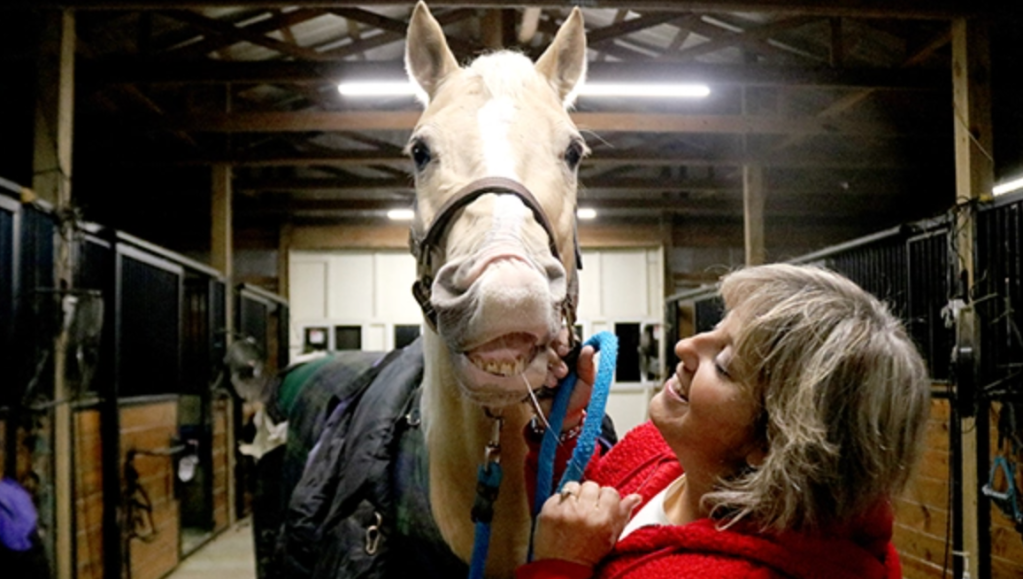 The future of a Mississippi horse farm that has been providing therapy and horseback riding to help children and adults with a wide range of special needs for more than three decades is up in the air because of eminent domain proceedings by Warren County and the City of Vicksburg.

The horse farm is one of three property disputes that still remain as work to acquire land for the expansion the Port of Vicksburg continues.

According to a November 2021 resolution jointly approved by both the Warren County Board of Supervisors and the Vicksburg Board of Mayor and Aldermen, the two entities embarked on eminent domain proceedings to obtain 28 parcels of land, totaling approximately 1,034 acres and totaling more than $830,000 in appraised value, according to county tax records.

However, three property owners still in the eminent domain process say they aren’t being offered enough.

One of those property owners is Leigh Ann Nosser, who operates the non-profit Rainbow Farms, which provides horseback riding lessons and equine therapy to people with special needs. Nosser said she was “taken aback” when the business was served a notice of eminent domain filings.

Nosser also said that the business, which has been in operation for nearly 35 years, would need to be relocated as part of a potential settlement of the dispute.

“One thing I will say is, I want an amicable agreement. I’m not trying to run anybody down or anything. I commend Pablo Diaz and the Warren County Port Commission,” she said. “(Diaz) has been very nice, very accommodating. It’s a tough position to be in.

“He always, from the get-go, said ‘We don’t want to put you out of business. We want to make you whole.’ And this whole time, we’d been working toward this piece of property on Oak Ridge Road,” she added. “We both agreed that’s a great piece of property. Everybody liked it and we were moving forward with that, and then, I guess, once the attorneys got involved, the whole thing seemed to be off the table and we got served.”

According to an appraisal that Nosser and her attorney had done, the farmland and its outbuildings are worth $1.6 million. However, the assessed value of the property is significantly lower, based on county tax records.

It’s something that’s caused a great deal of strife for clients, Nosser said, with many of them fearful that Rainbow Farms will go out of business altogether.

“I have a lot of handicapped people who do therapy with us, I have people with special needs who have show horses here, and they’re sitting in front of my desk crying, asking ‘What are we going to do? We have nowhere to go,” she said. “And I tell them we’re going to work this out. The business is going to keep going. Shutting down is not an option. I feel like I’m being more than fair, just asking them to put it back.”

Nosser said she did not know what she stands to receive if the land is acquired through eminent domain, nor did she know the amount of any offer that was made by the Port Commission to purchase her property.

“I think the move is needed; I’ve never opposed it. The points have been made and I want to work with everybody,” she said. “But we were headed that way, and Pablo and all of them said to me, ‘We want to make you whole.’ And (the new property) is what I need to make me whole.”

The Port Commission did not provide comments to confirm or deny Nosser’s statements, citing ongoing litigation.

Two other landowners also provided comments on the issue, explaining why they feel justified in taking the dispute to court instead of selling to the Port.

For Mildred Rone, the 70 acres of land at stake are of sentimental and income-producing value.

“They originally were going to take the whole place, and it’s down now to where they’re going to take about half of it. We only have about 70 acres. It’s planted in trees with a government program,” Rone said. “They’re not offering much money for it; none for the fact that I do have income from there. I see no reason for them taking the whole place. All they need is what is necessary for the port.”

Rone inherited the land from her father, who purchased it in the 1950s.

For landowner Ronnie Muirhead, the issue is his livelihood.

“They’re not offering enough money, for one thing,” Muirhead said. “That’s my livelihood, my recreation. It’s my living; I farm it.”

Muirhead has owned his 286-acre property for the last 11 years.

Both Rone and Muirhead declined to provide a dollar amount they were offered or are asking for their land, citing ongoing litigation.

“I’ll say this: It’s worth more than what they’re offering,” Muirhead said.

While the land disputes and eminent domain proceedings are ongoing, there are some landowners who said they see the value in the project — a value that far outweighs the negatives.

Bishop Oscar Degas, of The Word Church of Vicksburg, said his church sold 5 acres of its 18-acre property for the port expansion. Although originally listed as one of the properties involved in the eminent domain proceedings, Degas said the sale of the 5 acres was a “no-brainer.”

“(The project) hasn’t impacted us yet, but they needed 5 acres of the church property because that’s where the state said, MDOT said, the road has to go,” Degas said. “They were very fair with us — I didn’t get what I wanted — but they were very fair.”

The Word Church’s property was valued at $25,000 per acre because it is one of two parcels of land purchased for the port expansion that front U.S. 61 South. According to a June 24 story in The Post, the property sold for approximately $121,000.

Thankfully, Degas said, the church will not have to relocate.

“After seeing the land appraisal, what it was going for and what the market value was, it was a no-brainer,” Degas said. “And then you go to eminent domain, we probably would’ve gotten way less than we got. It was a fight we weren’t going to win, and that’s where MDOT said the road had to come in.”

Perhaps the greatest benefit of the port expansion for landowners in the surrounding area is the construction of a new levee system, as the property lies within a flood zone.

Even if a property hasn’t flooded in years, being in a flood zone equates to higher insurance rates and lower property values.

“Now, where once our 16 acres was in a flood zone, it won’t be in a flood zone anymore because we cut the deal,” Degas said. “If they will build the levee to protect their 5 acres (we sold them), they will have to protect our other 11 acres, and our property value will go up.”

Kiel Niederriter, of Industrial Wood Products, said he is eager for the new port complex and the levee.

Although his company’s property is not involved in the port expansion land acquisition, it is adjacent to the site and, Niederriter said, will reap the benefits as well.

“From a business perspective and us bordering that area where the new port will come into play, I think the addition of the levee they’re going to build should not only protect a wider swath of town and the community on the south side of (U.S.) 61, but it also gives us the potential that, in the future, if we want to grow our footprint, there’s accessible land that isn’t in a floodplain available,” he said. “It’s a major deal, because if you’re in a FEMA floodplain, it affects your insurance rate. I would assume every business in town would benefit from lower insurance premiums because we won’t be inside of that floodplain anymore.”

“I think that, for one, it gives us land accessible that we’d be able to expand at a much more affordable cost,” he said. “Another piece of that is, it’s my understanding that they’re going to extend the rail spur down to that port. If we have access to that spur, that opens up new markets for us, logistically, that we’re not currently doing business in or with, and that we can’t economically ship by truck.

“In general, I’ve got to believe that if they’re making another port, they’re doing so to bring new business to the community — which should not only provide more jobs in the community but also a bigger tax base to get other things done,” Niederriter added. “I hate that doing so requires them to use eminent domain to meet those goals. I don’t think anybody wants to do that.”

While no comment was provided from the Port Commission due to ongoing litigation, Warren County Board of Supervisors President Kelle Barfield provided a statement on behalf of the county.

Barfield stated the public project is the culmination of years of research, studies and due diligence.

“Our existing port, long the heart of our region’s transportation and commerce infrastructure, continues to serve this community well, but it is at maximum capacity,” Barfield said. “Additional inland port infrastructure is essential for the future growth and prosperity of the citizens of Vicksburg and Warren County, and for Mississippi as a whole.”

Barfield also justified the Supervisors’ actions, in conjunction with the city of Vicksburg and the Warren County Port Commission, in pursuing eminent domain to accomplish the project.

“We have successfully contracted for the purchase of most of the property necessary for the public port project. These eminent domain proceedings relate to the remainder of the necessary property,” she said. “While not entered into lightly, these proceedings will ensure that property owners receive fair market value and that this important public project comes to fruition for the benefit of our citizens.

“We remain in constant communication with affected landowners to ensure that they receive fair value through this process,” Barfield added. “Investing in the infrastructure of a new public port will ensure that our community is positioned to take advantage of economic opportunities being a river town affords us for years to come.”