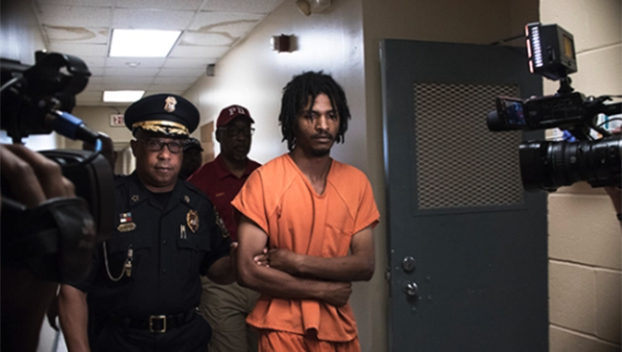 Then-Natchez Police Chief Walter Armstrong escorts James Christopher Anderson on June 7, 2019, after his arraignment in the murder of 4-year-old Armani Hill and the felony child abuse of her 3-year-old sister. (Democrat file photo)

Jury selection is set to begin Thursday morning in Sixth District Circuit Court in the trial of James Christopher Anderson, who is accused of capital murder in the death of 4-year-old Armani Hill and felony child abuse of her and her 3-year-old sister.

The trial is being held in the Adams County Courthouse.

The death and child abuse case eventually led to the firing of two Mississippi Department of Child Protection Services caseworkers and a supervisor.

Natchez Police arrested Anderson, who was 24 at the time, on Friday, June 7, 2019. The children’s mother, LaKeshia Jones, told police she left her children in Anderson’s care when she went to work on Wednesday, June 5, 2019. She told police the children were fine when she left them that morning.

Jones, who was 25 at the time, was also arrested on Friday, June 7, 2019, and charged with two counts of child deprivation of necessities with substantial harm.

Later that day, Anderson is said to have walked with the girls a quarter of a mile from their residence on Lafayette Street to Holiday Apartments, then-Natchez Police Chief Walter Armstrong said. At that time, the girls were allegedly badly injured, and one of them had trouble walking, he said.

At approximately 11 a.m. that day, Armstrong said Natchez Police officers responded to an ambulance call at 601 Washington Road, where they intercepted a private vehicle carrying what appeared to be a very sick child.

Armstrong said Hill had been moved from the private vehicle to an ambulance and both girls were transported to Merit Health Natchez in separate vehicles.

Adams County Coroner James Lee pronounced Hill dead at the hospital at 12:35 p.m. on June 5, and the 3-year-old was transported to University of Mississippi Medical Center in Jackson with severe injuries. She was later released.

According to The Associated Press, three Mississippi Department of Child Protection Services workers — two caseworkers and a supervisor — were terminated on Friday, Aug. 9, 2019, after an investigation into the death of Hill and the severe injury of her sister.

Anderson has remained in the Adams County Jail on $100,000 bond since his arrest.