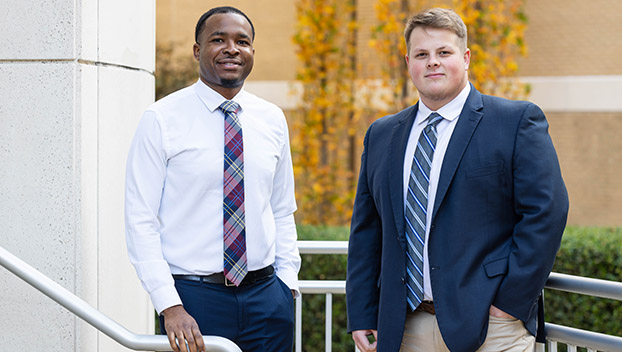 Josiah Collins, left, of Grenada and Noah Sasser of Harrisville are among this December's Accelerated BSN graduating class. Both have plans to work at UMMC.

Noah Sasser graduated Friday from the Accelerated BSN program at the University of Mississippi Medical Center School of Nursing, where professors and preceptors have “instilled a confidence in me that has me excited to begin my career.”

Sasser plans to work in the Medical Intensive Care Unit at UMMC.

His classmate, Josiah Collins, agrees. After graduating from the Accelerated BSN program Friday, he’ll go to work in 4 North inside University Hospital at UMMC. “It was demanding,” he said of nursing school, “but it was worth it.”

Collins, Sasser, and students and recent graduates like them are among the reasons why the University of Mississippi Medical Center School of Nursing has been named one of the 10 best nursing schools for men in the United States by the American Association for Men in Nursing.

“The School of Nursing at UMMC is dedicated to diversity in nursing,” said Dr. Julie Sanford, dean of the school. “Male nurses bring their unique viewpoints and skills that add to patient care. The rising number of men studying nursing at UMMC demonstrates why the American Association for Men in Nursing chose the School of Nursing as one of the 10 best nursing schools for men.”

The national recognition is exciting, said Dr. Marilyn Harrington, associate professor of nursing and assistant dean for diversity, equity and inclusion in the School of Nursing.

“We’re excited about being nationally recognized for the mission and vision we’ve quietly been striving toward for several years,” she said. “We will continue to make diversity in enrollment and retention a priority as we work toward accomplishing our strategic goals.”

Criteria for the honor include recruitment efforts targeting men, course syllabi that include men’s health content and efforts to link male students with male role models among faculty or in clinical settings.

The increase in male nursing students at UMMC comes as the need for nurses is on the rise across the country. According to the U.S. Bureau of Labor Statistics, the profession of nursing is expected to grow by 6 percent over the next decade, translating to 203,200 openings for registered nurses each year. The BLS reports that 13 percent of registered nurses are men, up from 7 percent in 2008.

Sasser, a Harrisville native who earned a Bachelor of Science degree in biology with a minor in microbiology from Mississippi State University, was drawn to UMMC for its excellence.

All nursing students can benefit from studying nursing at the state’s only academic medical center, said Dr. Derek Holt, assistant professor and director of Family Nurse Practitioner Track. “Males searching for a great education are drawn to the state’s only Level I trauma center. I believe young men are attracted to learning at an academic health science center with direct access to interdisciplinary education second to none.”

Dr. Joe Tacy, associate dean for academic affairs in the School of Nursing, said men in nursing are an essential part of diversity in nursing.

“Working toward increasing the presence of men in nursing is one way to help advance diversity in the field of nursing and support our core value of adding diversity in nursing,” he said.

“Throughout the 11 months of the Accelerated BSN program, faculty members held us to high standards but often encouraged us and made it their priority to ensure we were successful,” Collins said. “They prepared us well for careers in nursing.”

The Accelerated BSN program allows those with bachelor’s degrees in other disciplines to earn a BSN in less than a year.

Gordon Gartrell, nurse manager of pediatric intensive care at the state’s only children’s hospital, Children’s of Mississippi, earned his Bachelor of Science in Nursing and MSN at the School of Nursing at UMMC, and he’s completed coursework for a PhD in nursing there.

“I knew that I wanted to work with the sickest patient populations, and many men in nursing feel this way,” Gartrell said. “They want to care for the most acute patients. For these nursing students, the School of Nursing at UMMC is the best institution around.”

Gartrell said nursing faculty members “represent the best in nursing. It’s been a privilege to work with and learn from them.”

During his PhD studies, Gartrell said Dr. Lei Zhang, professor of nursing and associate dean for research and scholarship, was a role model. “He is one of the kindest people, and he genuinely cares about his students.”