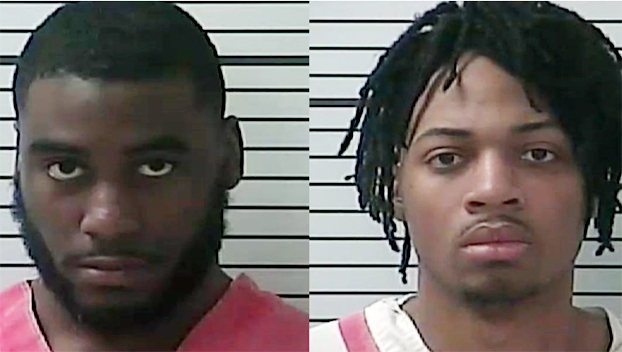 Officials say two men are in custody after shots were fired between two vehicles chasing each other through a Mississippi community.

Dayquan D’Marco Perkins, 21, and Keith Jashawn Cooper, 18, both of Gulfport, have been charged with aggravated assault and armed robbery after witnesses reported shots being fired between two vehicles that were chasing each other in the area of Old Spanish Trail and Oxford Place.

Witnesses reported the incident shortly after 11 p.m. Sunday.  According to witnesses, the driver of an orange truck and the driver of a silver sedan were chasing each other. Multiple gunshots were fired during the chase, witnesses said.

When officers arrived at the scene they were unable to find any suspects or vehicles described by witnesses. While investigating, officer were called to the scene of a two-vehicle accident near the intersection of Old Spanish Trail and Turner Street in Bay St. Louis.

The suspects reportedly fled the scene of the accident before officers arrived, but were captured a short time later and arrested.

The investigation is ongoing and more charges may be filed in the future, Prendergast said.

Owl gets lodged in truck, shocks rescuers when it…